A liquefied natural gas (LNG) supply system was commissioned in the Kaliningrad Region, as part of Gazprom’s offshore gas receiving terminal and the floating storage and regasification unit (FSRU) named Marshal Vasilevskiy. Technical management for the FSRU is provided by SCF Group. 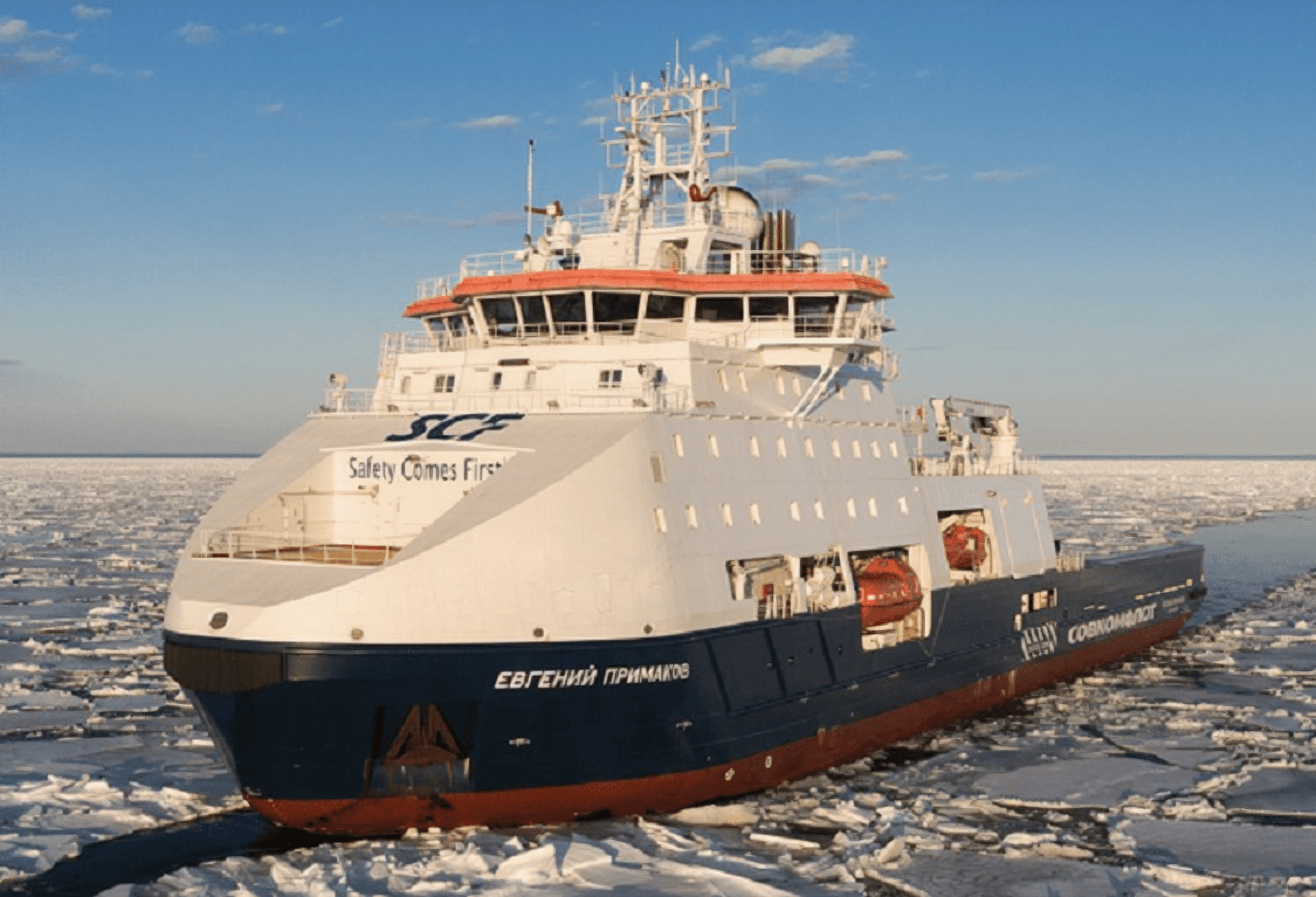 The Aframax-sized tanker Korolev Prospect was added to the SCF Group fleet. The vessel continues the ‘Green Funnel’ series, is fuelled by LNG and meets the highest international environmental requirements. 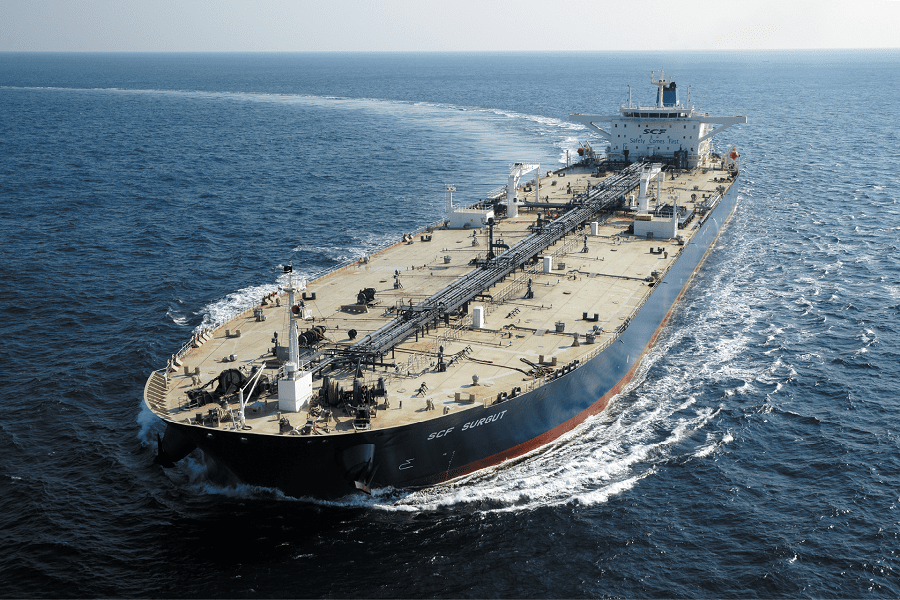 The crew of the tanker SCF Surgut rescued 12 people from the Pajarita yacht in distress in the Caribbean Sea.

Sovcomflot celebrated the tenth anniversary of the start of liquefied natural gas (LNG) shipments from the Sakhalin-2 project. In March 2009, the Grand Aniva LNG carrier delivered the first Russian LNG cargo to consumers. The successful implementation of the project enabled Russia to become a full fledged member of the club of LNG exporting nations, which at that point included just 15 countries.

The Vernadsky Prospect tanker was put into service in continuation of the Green Aframax tanker series. 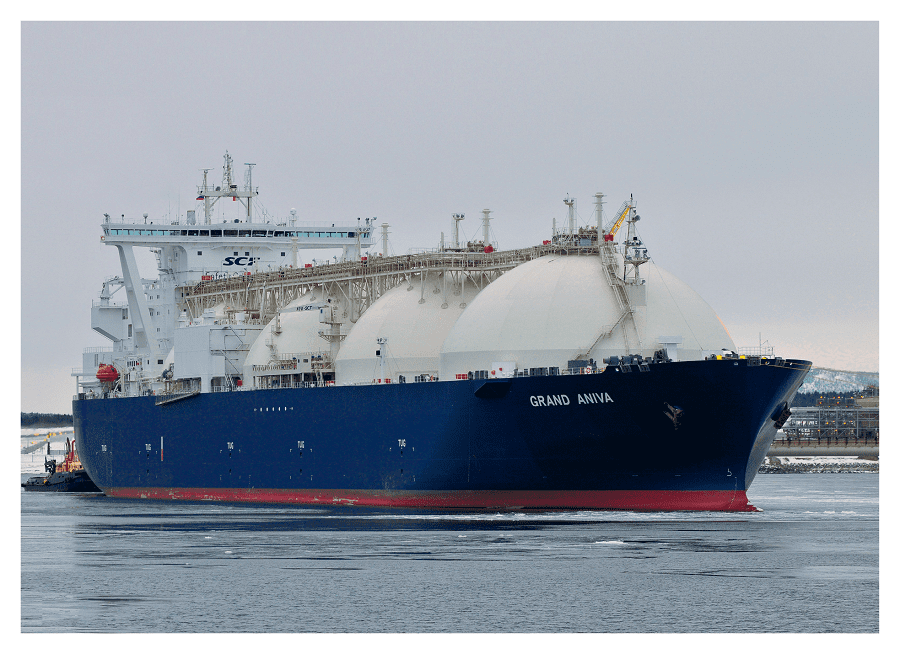 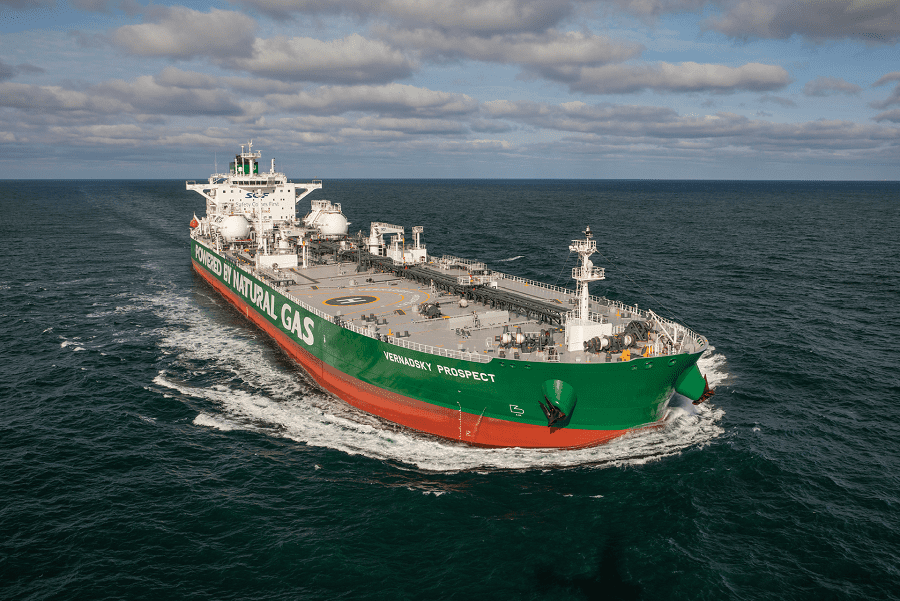 The Arctic shuttle tanker Mikhail Ulyanov loaded the milestone 10-millionth tonne of oil produced at the Prirazlomnaya platform in the Sea of Pechora. This shipment became the 150th in succession from the start of transport operations in April 2014. 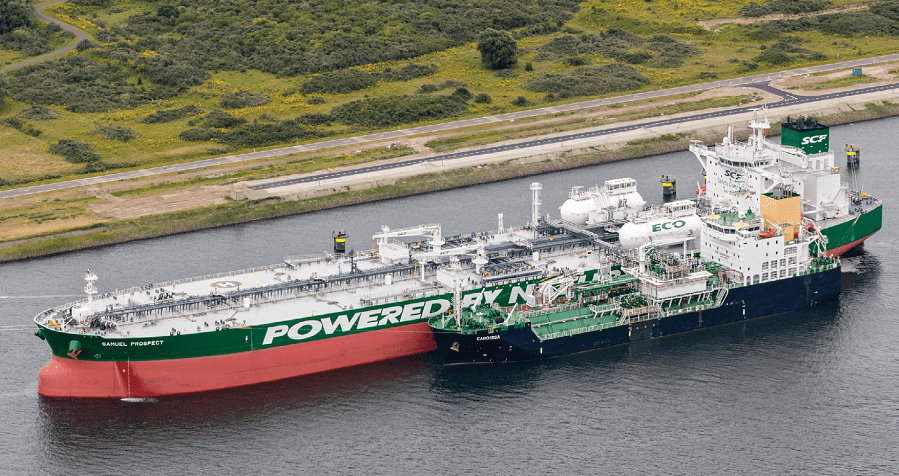 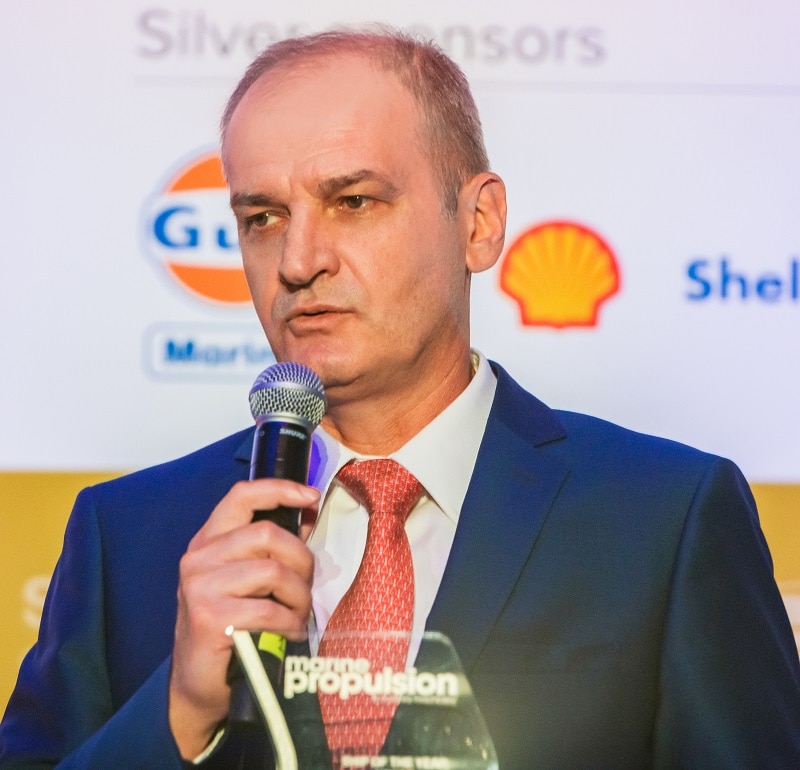 The Gagarin Prospect tanker was named ‘Ship of the Year’ at the Marine Propulsion Awards 2019.

The 18th Annual Sovcomflot Group Business Partners Meeting was held in Moscow. It was attended by about 200 representatives from leading Russian and global oil and gas companies, Russian Federation ministries and agencies, investment, finance, insurance and law companies and expert organisations.

SCF Group entered into a US$297 million credit facility for up to 10 years with three international banks - ING Bank, KfW IPEX-Bank and Crédit Agricole Corporate and Investment Bank. The funds were intended to finance the construction of two LNG carriers, which will operate under long-term contracts with Royal Dutch Shell. 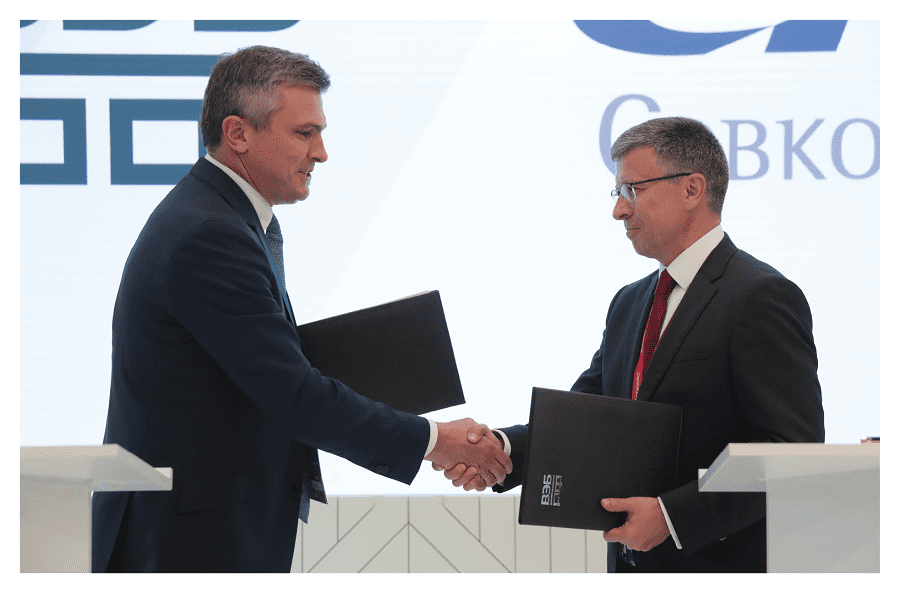 SCF Group and VEB.RF Group signed a package of agreements to finance the construction of three new-generation product carries fuelled by LNG. The vessels are being built at the Zvezda Shipbuilding Complex (Primorsky Krai).

The Gagarin Prospect tanker won the Next Generation Ship Award 2019. The award giving ceremony was held in Oslo as part of the opening ceremony for Nor-Shipping 2019, the world’s largest shipping exhibition and conference. 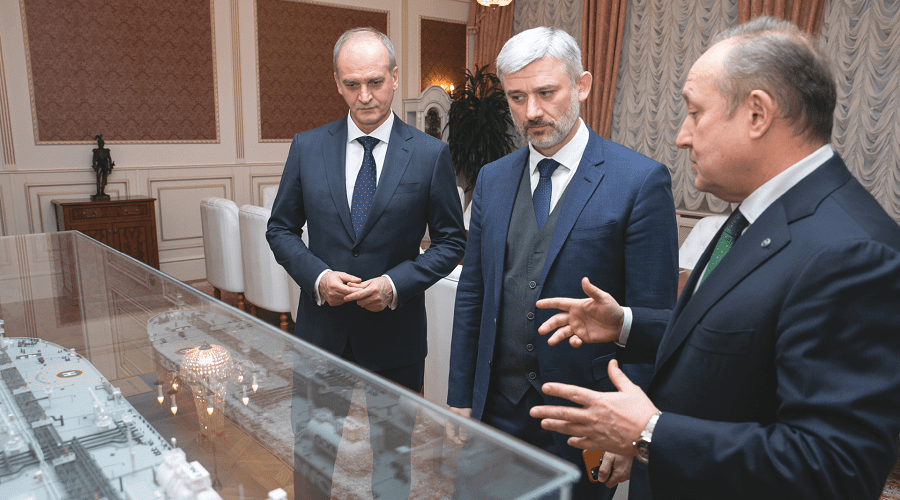 Being guided by the resolutions of an extraordinary general meeting of shareholdersdated 23 September 2019 and under directives of the Russian Government, the PAO Sovcomflot Board of Directors elected Sergey Frank as its Chairman. Igor Tonkovidov was appointed as the Chief Executive Officer of PAO Sovcomflot.

Sovcomflot and NOVATEK signed an agreement to set up a joint venture SMART LNG. The company will be the owner and operator of a tanker fleet for year-round transportation of natural liquefied gas under the Arctic LNG 2 and other current and prospective projects of NOVATEK.

The SCF Group fleet was supplemented with the Arctic shuttle tanker of the Shturman Albanov series. In the run-up to the 200th anniversary of the discovery of Antarctica by a Russian expedition led by Bellingshausen and Lazarev, the new tanker was named after Mikhail Lazarev, an outstanding Russian pioneer. Mikhail Lazarev continues the series of shuttle tankers operating for Gazprom Neft’s Novy Port project.

The large-capacity tanker Korolev Prospect made a voyage via the Northern Sea Route using exclusively environmentally friendly LNG fuel along the whole route for the first time in the history of navigation.

Joint ventures of Sovcomflot Group and NYK Line entered into a US$176 million credit facility for up to 8 years with a consortium of three international banks: Sumitomo Mitsui Banking Corporation, Société Générale and Shinsei Bank. The raised funds were used to refinance two ice-class LNG tankers, Grand Aniva and Grand Elena, jointly owned and managed by Sovcomflot and NYK Line. 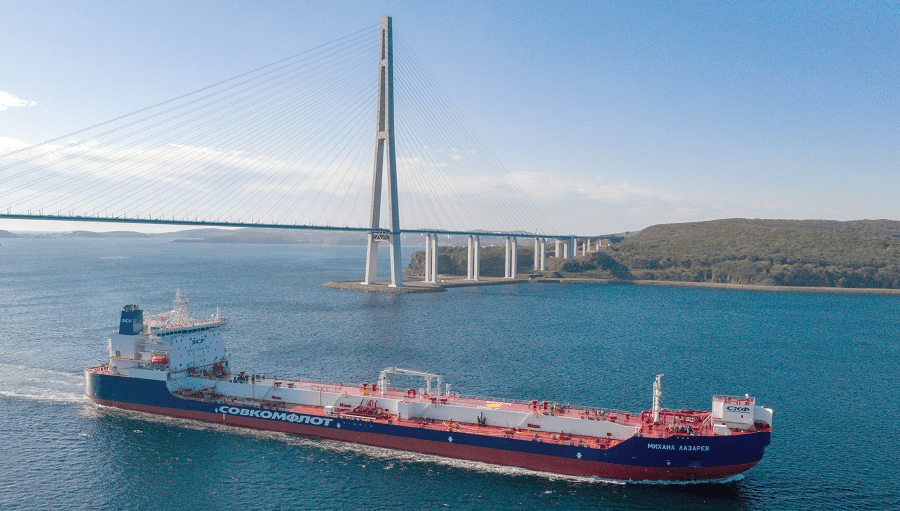 Sovcomflot Group and VEB.RF Group entered into an agreement for lease financing of a pilot Artic LNG carrier for the Arctic LNG 2 project. At the same time, Sovcomflot Group and NOVATEK Group signed a long-time charter agreement for operation of the LNG carrier under the Arctic LNG 2 project. The vessel will be built at the Zvezda Shipbuilding Complex in Bolshoy Kamen, Primorsky Krai.

Sovcomflot Group won the award for ‘Company of the Year’ at the 2019 Lloyd’s List Europe Awards.

The crew of Gennadiy Nevelskoy, a multifunctional icebreaking supply vessel, rescued three fishermen in distress in the Sea of Okhotsk.