In 2019 the Group put into operation three LNG-fuelled Aframax crude oil tankers - Gagarin Prospect, Lomonosov Prospect, and Mendeleev Prospect. The vessels are part of a series of six ‘Green Funnel’ tankers specially designed to use LNG as the primary fuel. The first three vessels of the series were put into operation in 2018.

SCF’s ‘Green Funnel’ tanker series has set a new standard of environmental sustainability in the maritime shipping industry. The tankers’ main engines, auxiliary engines, and boilers are dual-fuel (using conventional ship fuel and LNG). In addition, these vessels are fitted with Selective Catalytic Reduction (SCR) technology, which enables compliance with Tier III regulations governing NOx emissions (Annex VI to the International Convention for the Prevention of Pollution from Ships) even when running on conventional fuel. SCF’s ‘Green Funnel’ tankers with a deadweight of 114,000 tonnes each have a hull with a high ice class (1A). In February 2018 Sovcomflot Group and Shell entered into long-term charter agreements for two vessels of the series. Shell also provides LNG supply.

Serial construction of ‘Green Funnel’ tankers has started at Russian shipbuilding facilities, at the Zvezda Shipbuilding Complex (Primorsky Krai), as part of cooperation between Rosneft and Sovcomflot. In September 2018, an order was placed for the construction of two Aframax crude oil tankers using LNG as the primary fuel, to be subsequently charted to Rosneft under long-term time charter parties. The first vessel is scheduled to be commissioned in 2022.

In addition, an order for the construction of three MR product tankers using LNG as the primary fuel was placed with the Zvezda Shipbuilding Complex in 2019. The tankers are designed to transport petroleum products and gas condensate and have been chartered to NOVATEK under long-term time charters. 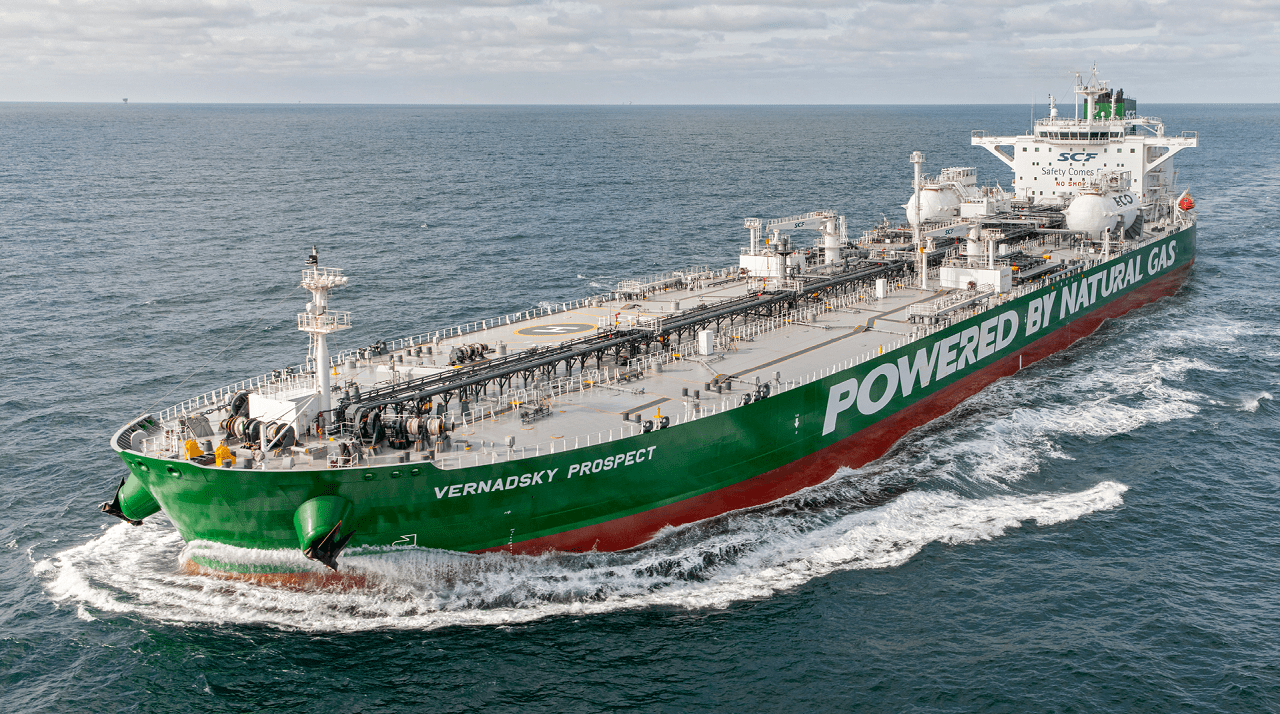 In September 2019 Sovcomflot put into operation a new Arctic shuttle tanker with ice class Arc7, Mikhail Lazarev. The tanker is intended to serve the Novy Port project under a long-term charter agreement between PAO Sovcomflot and PAO Gazprom Neft.

In terms of its technical characteristics, the Arctic shuttle tanker Mikhail Lazarev is one of the most advanced and high-tech vessels in the global tanker industry. The vessel continues a series of unique tankers of the Shturman Albanov type, designed for year-round transportation of crude oil from the Novy Port oil and gas condensate field. These vessels are capable of operating in the Arctic at temperatures down and their draft enables them to manoeuvre freely in the shallow Gulf of Ob.

The first three vessels were put into service in 2016. Since then they have transported 9.5 million tonnes of oil via the Northern Sea Route. The successful experience in tanker operations in the extreme conditions of the Arctic and further development of the Novy Port project created preconditions for increasing the number of vessels in the series. 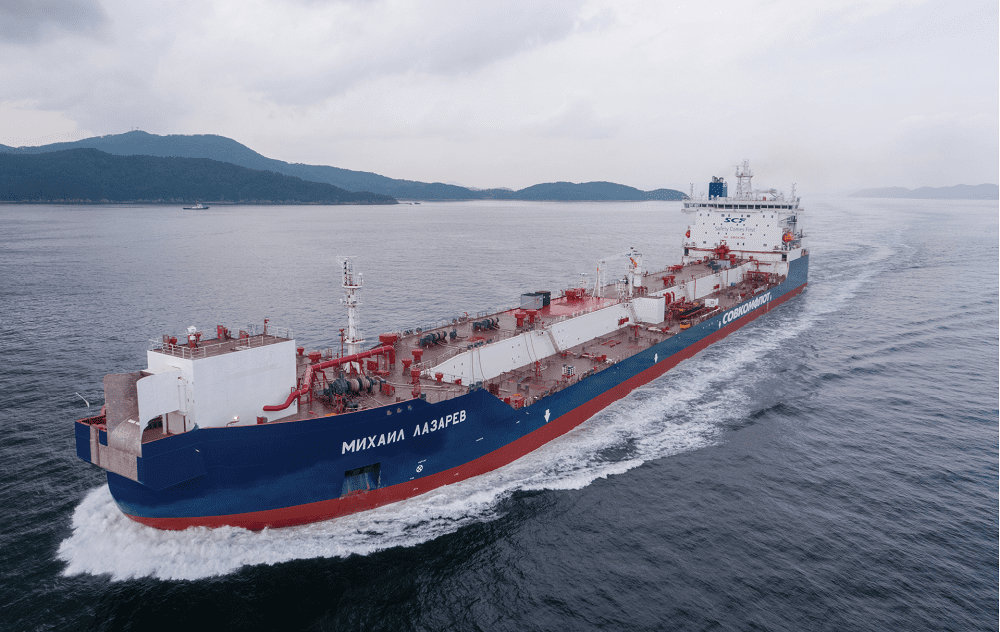 The construction of three fifth-generation Atlanticmax LNG carriers continued in 2019.

The first of the three vessel, the LNG carrier SCF La Perouse, was put into operation on 10 February 2020 and commenced a long-term charter with Total. Two similar vessels to be operated under agreements with Shell are scheduled to join the SCF fleet in 2020-2021.

These LNG carriers with a capacity of 174,000 cubic metres are fitted with an upgraded Mark III Flex cargo containment system and dual-fuel diesel X-DF engines. Such a propulsion plant is more reliable and requires less time and resources for planned repairs compared to a dual fuel diesel electric engine (DFDE). This type of gas carrier consumes 30 % less bunkers than fourth-generation gas carriers. A small amount of boil-off gas and a boil-off gas partial re-liquefaction system will enable the charterer to maximally reduce cargo losses during long voyages and waiting time, giving vessels of this type a competitive advantage. 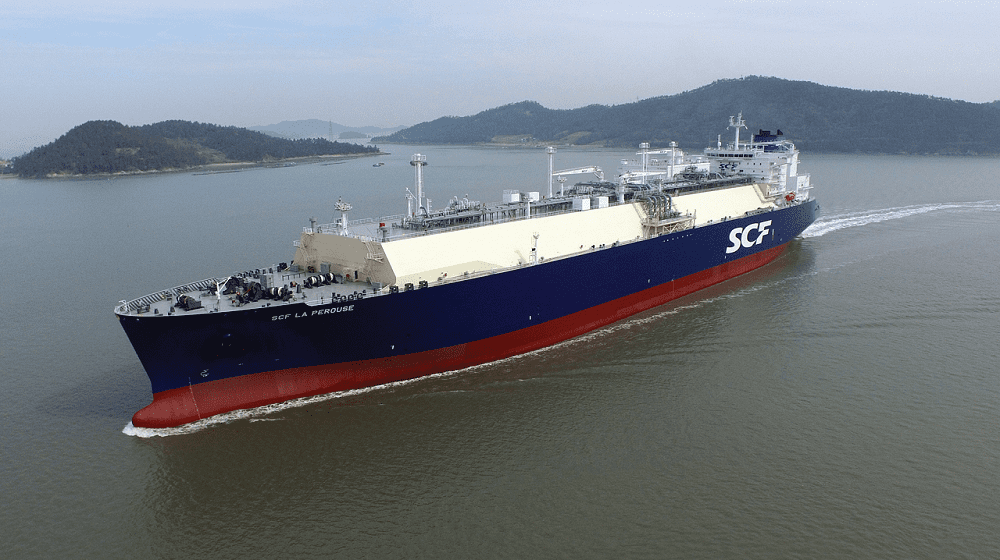 In 2019, PAO Sovcomflot and PAO NOVATEK set up a joint venture, SMART LNG. This was a result of long-term cooperation started in 2010 when Sovcomflot proceeded to designing a logistic scheme for eastbound hydrocarbon shipments along the Northern Sea Route. Sovcomflot directly participated in developing the transport component of the successfully implemented Yamal LNG project, and today it operates the world’s first Arctic LNG carrier, Christophe de Margerie.

The main task of the joint venture is to provide year-round LNG transportation from the Arctic LNG 2 and other current and prospective projects of NOVATEK.

The Arctic LNG 2 project involves the construction of up to 15 new-generation Arctic LNG carriers with ice class Arc7 (plus two optional vessels).

Shipbuilding contracts for the first five vessels for the Arctic LNG 2 project were concluded in 2019. The LNG carriers were ordered by a VEB Leasing Group company, with one vessel to be subsequently transferred for operation to SCF Group and four to SMART LNG after completion of construction. The shipbuilding contracts for the LNG carriers for SMART LNG entered into force after the end of the reporting period. 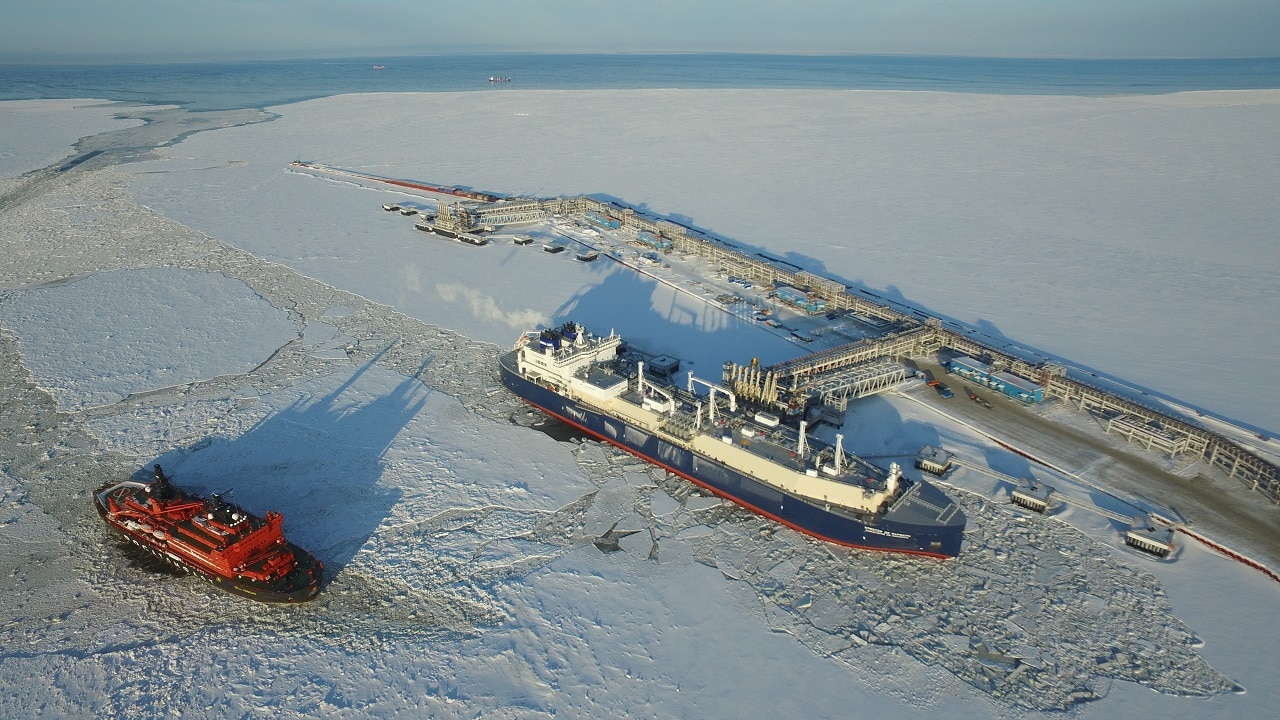 In 2019, Sovcomflot Group entered into shipbuilding contracts for two Aframax shuttle tankers with ice class 1C and a deadweight of 105,000 tonnes each. The vessels are intended to operate under long-term charter contracts with Exxon Neftegas Limited, the operator of the Sakhalin-1 project (development of oil and gas reserves in the Sea of Okhotsk, on the north-eastern shelf of Sakhalin Island). The new vessels were ordered to renew the SCF Group fleet serving the De Kastri export terminal. They are scheduled to be put into service in 2022. 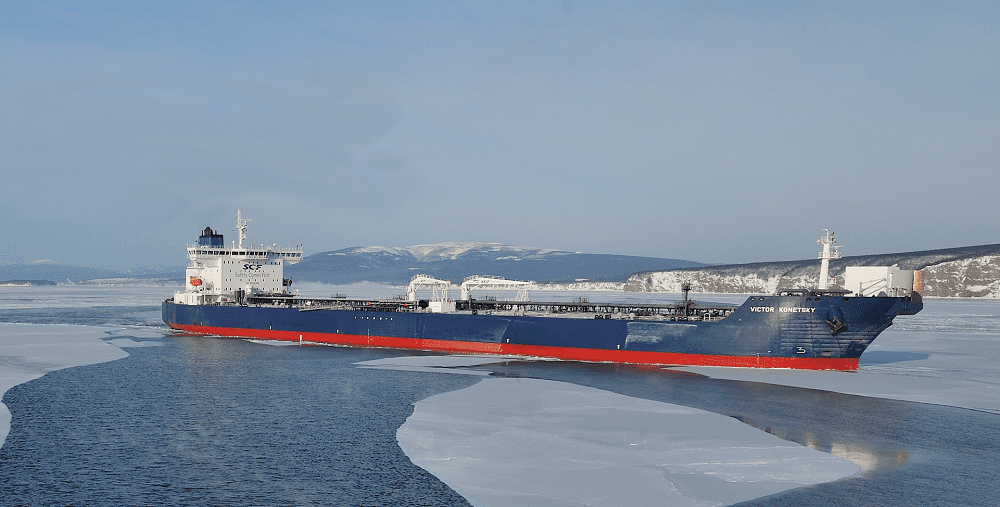